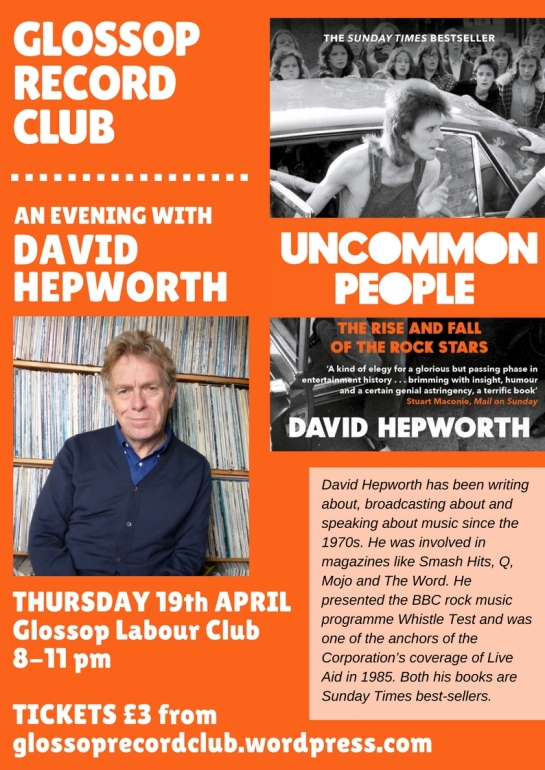 UPDATE: Our online ticket allocation for this event has now sold out. We have just two tickets left that will be available on the door on the night. Please get in touch if you would like to reserve them. THIS IS A TICKET ONLY EVENT. Thank you.

On Thursday 19th April, we welcome veteran writer and broadcaster David Hepworth to Glossop Record Club to discuss his best-selling books ‘Uncommon People‘ and ‘1971: Never A Dull Moment‘ and his lengthy career as a music journalist, magazine editor and publisher with our host Gavin Hogg. We’ll play a few records relating to the books along the way as well as the chance to ask David your own questions.

If you’ve picked up a British music magazine in the last 40 years, you’ll have encountered David’s work. From the early days of Smash Hits, to founding Q, Mojo and The Word, he’s been an ever-present figure in some of the most successful and influential music magazines.

As a presenter, he fronted Whistle Test in its final few years alongside fellow music journalist Mark Ellen and was also part of the presentation team for Live Aid in 1985. Along with Mark, he’s also the host of the excellent A Word In Your Ear podcast, where he discusses music books with their authors.

Tickets are £3 from here or click the ‘buy tickets’ button. Your ticket will be valid as a £3 voucher towards one of David’s books on the night.

Across the country in the last few weeks, in the back rooms of pubs and in small independent venues, people have been finding their own ways to commemorate the life and genius of Mark E Smith, play his music and share stories. Defiantly single-minded and fiercely independent to the end, this is how he deserves to be remembered, with DIY celebrations organised by those who loved his music.

And in a packed Glossop Labour Club, that’s exactly what we did, with the help of Gavin, Darren and Steve and several piles of records. With personal recollections and readings from a few choice books about Smith and The Fall, between them they managed to navigate 40 years of music – from the first EP to the last LP – each track and every tale reminding us why (despite or because of?) they were such a unique band. We were also lucky enough to welcome two ex-members – Simon Wolstencroft (drums 1986-1997) and Ben Pritchard (guitar 2001-2006) – who really brought to life what it was like to be in The Fall and work with Mark E Smith.

It’s a night we won’t forget.

Thanks to Gavin, Darren and Steve for putting this session together and also to Funky Si and Ben for being so generous with their time and stories.

Listen to some of the music played here or on the player at the end of this post.

It’s taken some doing, but tomorrow night at 8pm at @GlossopRecord you can watch me dilute 20 years of these vinyl albums by #TheFall into just 5 tracks as part of the MES night. Some of the Fallen will be there, including @simonWolstencr1. Free entry & cheap beer too! pic.twitter.com/oIHjFPp4AI

Ben Pritchard @GlossopRecord tells how Mark E Smith got him to come up with a riff for Dr Buck’s Letter. “I got to the studio and Mark said ‘right, I’m off to the pub, off yer go cock.’ The engineer put the headphones on me and I kept playing till I came up with something.” pic.twitter.com/QMlPiY9jGE

The magnificent LP ‘Extricate’ by The Fall, introduced @GlossopRecord by the Mancunian music legend @simonWolstencr1 pic.twitter.com/Z6d7ncwsci

Brilliant to be a part of a fab night @GlossopRecord last night. Fantastic choices from @SteveMcVinyl and @WholeHogg and great stories from @simonWolstencr1 and @Benpritchard6.
More detail on my story here… https://t.co/TJTsXaKnzY 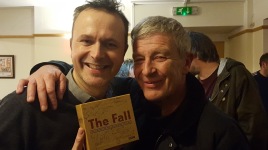 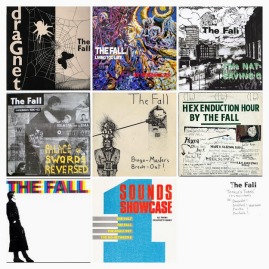